The Order of Preachers is celebrating over 800 years of preaching the Gospel!

We are the Our Lady of Perpetual Help Group of the Southern Province of St. Martin de Porres, known as the Charlotte Lay Dominicans. We are lay members (tertiaries) of the Dominican Order (O.P.).

You are welcome to join us! If you are 18 years or older, have been Catholic for at least two years, are a mature and faithful Catholic, and in conformity with the Teaching Magisterium of the Catholic Church, you are welcome to visit our group meetings as an Inquirer. See our contact page to notify us of your interest.

WHAT ARE LAY DOMINICANS?

The Order of Preachers was founded by St. Dominic de Guzman, a Spanish priest born in Caleruega in 1170. In 1203 he organized his traveling preachers and founded the Dominican “Order of Preachers” (the meaning of the OP that you see after a Dominican’s name). Dominicans all over the world continue to draw upon the charisms of St. Dominic and are formed throughout their entire lives according to the priorities and fundamentals of the Dominican way of life. There are four principal branches of the Order, all true members of it: 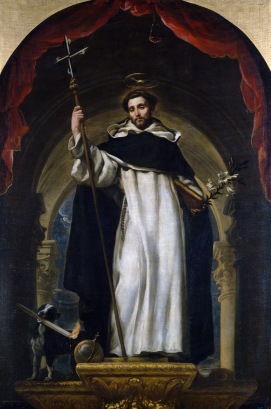 The Friars: the brothers and priests who profess solemn vows of poverty, chastity, and obedience and who may be involved in a variety of ministries. All serve the primary role and ministry of the Order: preaching. Like the other branches, the men dedicate their lives to prayer, study, and community life in order to carry out the priorities of the Order, preaching and care of the poor.

The Nuns: women who live intense lives of prayer in monasteries, profess solemn vows, and participate in the mission of the Order from their cloisters.

The Sisters: women who profess the simple vows and live active apostolic lives along with the prayer and community life that is the hallmark of Dominicans.

The Laity: men and women from all walks of life who commit themselves through formal profession to the Dominican way of life integrated into their established life styles, sharing in the charism and priorities of the Order.

Binding all of these branches together is the common love for the Church and the Order, commitment to the mission of preaching, and devotion to prayer (especially the Liturgical prayers of the Hours and the Mass).

Prayer: a faithful regimen of daily prayer: daily Mass, the Liturgy of the Hours in the morning, in the evening and before bed, personal meditation, particularly of the Scriptures, and the Rosary are essential elements of Dominican Spirituality. In addition, a yearly retreat, preferably in community, is considered essential for remaining centered and committed to the Christian and Dominican vocation.

Study: a vigorous seeking after truth, especially in Scripture, Church documents, and writings of the saints and theologians, lead the Dominican to greater truth. The principal part of the meetings of the Laity is the organized study program in which all participate and for which all prepare.

Apostolate: a willing and cheerful fulfillment of apostolic work such as ministry to the poor, the marginalized, the unfortunate, the sick; preaching as the opportunity arises and in accord with the station in life of the lay Catholic and Dominican, the example of a joyful and moral life, readiness to enter into dialogue with the unbelievers or faith-troubled, eagerness to witness to the Good News.

Community: an empathetic eagerness to enter into the relationship of brothers and sisters in our father Dominic, to gather for support, encouragement, and appreciation of one another, to study and pray together, and to accept the obligations of belonging to a cohesive group.

LAY FRATERNITIES AND THIRD ORDERS IN THE CHURCH

When we speak about Lay Fraternities and Third Orders in the Catholic Church, we generally mean lay members of religious orders. The Dominicans, Franciscans, Benedictines, Norbertines, Carmelites, and Missionaries of Charity are all examples of orders in the Church who have lay branches, although each order may have a different way of referring to its lay members. (For example, in the Dominican Order, we are called lay Fraternity members, or tertiaries. In the Missionaries of Charity, lay cooperators are called coworkers. It should also be noted that some orders receive professions from those in their lay branch, as with the Dominicans, while others simply invite laity to participate fully in the living of the order’s charism without making professions.)

Lay men and women in the Fraternities of St. Dominic do not necessarily live in community with each other but practice many of the same spiritual disciplines of the religious of that order. Any Catholic in good standing may join these associations.

The Beginnings of the Fraternities of St. Dominic

In the early days of the Dominican Order, neither St. Dominic nor the early Preachers desired to have under their jurisdiction-and consequently under their responsibility-either religious or lay associations. During his life, then, St. Dominic never wrote a rule for the Fraternities. Instead, it happened that a large body of laity who were living a life of piety found themselves attracted to St. Dominic and his initiative; they grouped themselves around the rising Order of Preachers and constituted on their own a “third order.”

In 1285, the need for more firmly uniting these lay people to the Order of Preachers and its direction led the seventh Master General, Munio de Zamora (at the suggestion of Pope Honorius IV) to devise a rule known as “The Third Order of Penance of St. Dominic.” Pope Honorius IV granted this new fraternity official Church recognition on Jan. 28, 1286.

In the rule written by Munio de Zamora, some basic points are: 1) the government of the Dominican Fraternities is immediately subject to ecclesiastical authority; 2) in the spirit of St. Dominic, those in the Fraternities should be truly zealous for the Catholic faith; 3) Fraternity members visit sick members of the community and help them; 4) Fraternity members help others through their prayers.

After the Fraternities of St. Dominic got off the ground, it drew many new members. Its fraternity in Siena especially flourished. Among the list of members of that fraternity was she who would become St. Catherine of Siena. Wherever the Dominican Order spread throughout the world, the fraternity chapters spread with it. 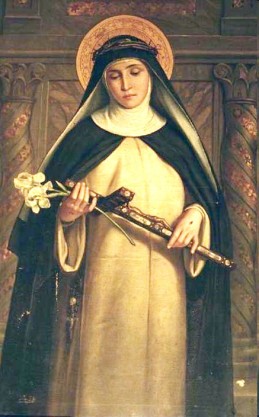 We should mention too that, at its conception, the Fraternities served the Church in a military capacity, defending her from opposition. Now, certainly, Third Order Dominicans do not serve militarily but instead defend the Church from error through preaching and teaching the truth about Catholicism.

St. Catherine of Siena is the patroness of the Fraternities of St. Dominic. Following her example, Dominican tertiaries have always shown special devotion to the Church. Also in imitation of their patroness, who wrote profound mystical works and emphasized the truth of Catholic teaching in all of her letters, Fraternity members labor to know well their faith and to articulate it to others with persuasion.

Several saints and blessed in the Church have been in the Fraternities, including St. Catherine of Siena, St. Rose of Lima, Bl. Pier Giorgio Frassati, and St. Louis de Montfort.

Continue reading about Dominican Spirituality, our Formation Process, and our Rule of Life.

Other Lay Dominican Provinces in the United States:

Western Province | Province of the Most Holy Name of Jesus